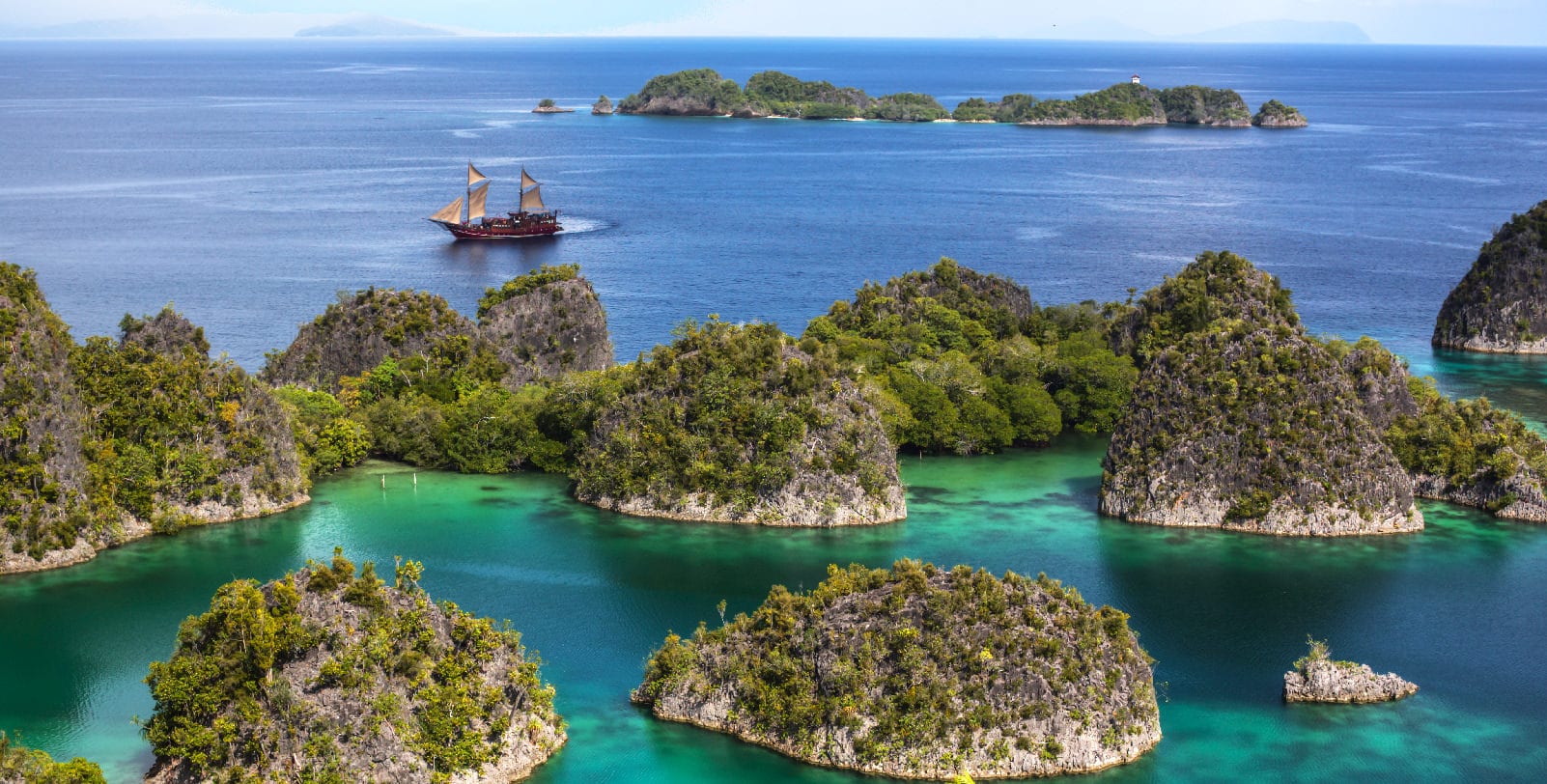 Raja Ampat means ‘Four Kings’. In an archipelago of over 1,500 small islands there are four main islands or ‘kings’– Waigeo, Salawati, Batanta, Misool. The majority of Raja Ampat is in Marine Protected Areas. These islands usually experience varying visibility depending on the weather conditions and warm water around 27-30C (81-86F).

Misool is in the south of Raja Ampat and we will dive at the many small islands in the southeast. Over the past years Misool has become Raja Ampats best diving area, being famous for the profusion of colorful soft corals, sea fans beautifully draped all over the reefs and a huge amount of all kind of fishes on every single dive. Take a look at some photos taken in this area in our album Soft Coral Heaven.

The islands in southeast Misool are grouped by areas. Here are the names of the areas and dive sites we may visit (weather permitting):

Boo Windows is the famous dive site in this area. It is best known for the “windows” or rounded openings on the end of the largest rock that completely pierce the reef from the surface down to about five meters/fifteen feet. Although the two rocks appear separate from the surface they are in fact connected underwater by a magnificent reef draped in soft corals and brimming with fish. See photos of the Windows here. Boo Ridge is an underwater ridge coming off the eastern point of Boo Island. Both sides are covered in huge gorgonian sea fans. At these dive sites look out for turtles, reef sharks, pygmies, nudis and schooling batfish, fusiliers and snappers. Shadow Reef is a submerged seamount south of Boo.

The fish life here is profuse with napoleon wrasses of all sizes, baby white tip reef sharks sleeping under the table corals, schooling barracuda and batfish and for the lucky ones maybe a manta ray circling the cleaning stations. Birthday Cake is a beautiful ridge in the Boo Area. Look for pygmy seahorses, flatworms and nudibranch in the deeper section and beautiful soft corals in the shallows, where we even have seen the famous “walking shark” – epaulette shark. Eagle Nest is a seamount close to the island of Warakaraket. With the right current we have been lucky to see lots of fish action, including grey reef sharks, giant travellies hunting in clouds of fusiliers and even manta rays.

The tiny islands of Yuliet and Romeo both have surrounding plateaux in the shallows that slope down to reefs or small walls. At Yuliet there is a good chance to see the ‘Santa Claus pygmy’ a red colour variation of the Denise pygmy seahorse. In the shallows are large coral heads completely covered in colourful soft corals. Schools of barracuda and batfish as well as napoleon wrasses are often seen here. Romeo is a great night dive where we will look for the endemic epaulette shark, the ‘walking’ shark.

Fiabecet area has a selection of dives where the colourful soft corals and beautiful sea fans literally smother the reefs. The soft corals here are truly outstanding. There is a deep underwater ridge connecting the island of Boo in the east to the island of Kalig in the west. In parts this ridge moves up shallower and forms the dive sites of Boo West Corner, Batu Kecil (aka Tank Rock), Nudi Rock, Whale Rock and Kalig Ridge.

Neptune Fan Sea is a small channel between two islands with a shallow wall completely covered in some of the biggest gorgonian sea fans you will ever see. At the start of the dive explore the beautiful coral heads where huge groupers can be hiding. Then drift along the wall and enjoy the view of the sea fans, stopping once in a while to find the tiny pygmy seahorse. Four Kings is a stunning dive site made up of four underwater pinnacles. Swim from one rock to the next enjoying the soft corals and fish life. Look out for schooling big eye jacks, spadefishes and grey reef sharks. Wedding Cake, Dunia Kecil and Wayili Rock offer chances to see schools of batfish, trevallies, barracuda, pygmy seahorses and reef octopus.

Daram is the most easterly point of the islands we might visit in Misool. The reef at Andiamo is stunning and is large enough for at least two dives. There is a submerged pinnacle where sea fans are surrounded by schools of fusiliers and batfish. A short swim across a sandy bottom brings you to the main reef lush with soft corals. In between the two islets is a gap thick with sea fans and is excellent for wide-angle photography.

Look out for black tip reef sharks and Napoleon wrasse, if you can see them through all the fish! Candy Store is so named because the first divers to explore this reef felt like kids in a candy store. Huge sponges, beautiful soft corals and sea fans cover this dive site, especially in the valleys where schools of fusiliers, butterfly fish and sometimes barracuda gather. Warna Berwarna in Bahasa Indonesia means “Vibrant Colors”. Expect to see sea fans in all possible colors and watch out for pygmy seahorses. On the north western side of the island there is a beautiful ridge coming out where tons of fusiliers and orange spotted trevallies hang out in the blue. The shallows are covered with healthy hard corals and often we get to see schooling bumphead parrotfishes.

Kaleidoscope is so called because of the profusion of colours produced by the huge soft corals draping the shallow rocks and coral heads. A ridge extends out west from the island which can full of fish when the current is running. Back at the island finish the dive under the overhangs.

The little islets of Baby Rock and Two Tree Island create amazing dive sites with abundant fish life. There is a resident school of batfish at Baby Rock and Two Tree Island is often full of thousands bait fish. The Watch Towers is a massive seamount with tons of black coral in the deeper section. Schools of yellow snappers, barracudas and giant trevallies can be found in the up-current side. On the hard coral plateau look out for Wobbegong sharks and crocodile fish.

There is a possibility on this day to visit Tomolol Cave that has a river-sized waterway running through it. We take a 20-minute tender ride through a pearl farm and into the rugged interior. Once at the cave we float and paddle our way inside to enjoy the amazing rock formations. There is a large opening at the other end and also a ‘secret’ cave to explore. This tour is dependent on receiving permission from the pearl farm and local village. Check our Tomolol Cave photo album.

Batanta Island is the only black sand dive we will be doing during this trip. Here we will be doing some creature hunts from mantis srhimps to the elusive Rhinopias or one of our favorite to look for is the juvenile Wobbegong, the size of the palm of your hand makes it one of the most rarest creature on the site. Black Beauty is a place where we will spent all day diving in the same site but every dive is completely different, the sandy slope is also covered with algae which is the perfect place for creatures to hide, such as ghost pipe fish and frog fish. Different octopus like the wunderpus or the algae octopus have been seen here.

Penemu is an island west of Waigeo with a selection of dives sites. Melissa’s Garden is the most well known. Here there are very healthy hard coral reefs in the shallows and a beautiful coral garden sloping to the sides where schooling fish hang out in the current. Wobbegong sharks like to sleep under the coral heads and inside the large cup corals here. Hundreds of anthias dance in and out of the corals where you might also see a sea snake.

Penemu Wall and My Reef are also great dives in this area. After the two morning dives we will visit the viewpoint in Penemu where you can appreciate the iconic Raja Ampat view of the groups of islands nestled inside beautiful blue lagoons. Check out our Beaches & Islands album. At sunset we will dive at Batu Rufus. There is a shallow swim through framed beautifully by soft corals and sea fans. Below this is a sloping reef where hard corals shelter cardinal fish in the shallows and in the deep, Pontohi seahorses and nudibranch can be found on the coral heads.

The strait that flows between Waigeo and Batanta is rapidly becoming known as having really good diving in Raja Ampat as a result of the nutrient-rich ocean currents passing through. Everything that makes for a wonderful dive can be found here. But even beyond the usual delights and the satisfaction of spotting prized macro subjects such as the newly discovered Pontohi pygmy seahorse on the coral heads, there are surprises to be found in every dive.

The fish life in this area is as plentiful as can be expected at sites with a great deal of healthy hard and soft coral. Wobbegong sharks can also be found at any of these dive sites, especially at Mioskon. Cape Kri holds the impressive record of 374 fish species identified during one 90-minute dive. Blue Magic is a submerged seamount where there is a chance to encounter Giant manta rays.

Ironically, sardines are about the only reef fish not found at the site of Sardine Reef, but you won’t even notice as you see swarms of fusiliers, surgeonfish, trevallies, rainbow runners, sweetlips and bannerfish practically blocking out the sky swarming over a reef decorated with sea fans, soft corals and huge orange elephant ear sponges encrusted with pastel colonies of tunicates. One of the more unique thrills of this site is being able to hear “fish thunder” – the loud booming sound made when a large number of fish move rapidly through open water.

There is also a small village with Sawandarek Jetty. In the shallows the jetty posts are covered in soft corals and below look for sweetlips, big eyed jacks and massive green turtles. On the reef see huge giant clams nestled among pulsing soft corals. At night look for huge lobsters and maybe even catch a glimpse of the endemic epaulette shark, the ‘walking’ shark. The reef also provides shelter for many interesting small animals like hermit crabs, flatworms and the very cute pughead pipefish.

Between the dives there is an opportunity to visit the village on Sawandarek Island to see the traditional way of life for these island people. Be ready to be greeted by many children who are more than willing to pose for photographs. Anyone joining our cruise is more than welcome to bring along some goodies for the children at Sawandarek. Obviously the children love sweets but we encourage people to bring pencils, pens, notebooks or coloring books – all of which don’t rot their teeth! The school always needs more materials and the girls love hair clips and bands. Please try to limit the amount of plastic packaging, leave this at home where it can be correctly recycled.
An optional tour in the Dampier Strait area is a hike in the jungle to see Birds of Paradise. There will be an extra charge for this tour and it is dependent on the weather and all of the guest’s preferences.

On the last full day of the cruise there will be one or two dives depending on the flight times out of Sorong the next day. After the dives we will travel back to Sorong.