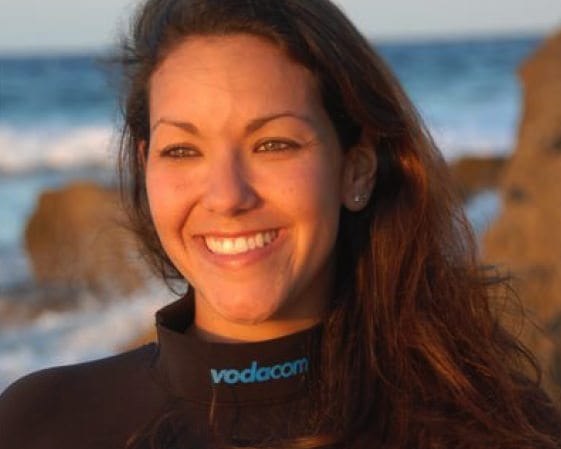 Educated in the USA and Australia, Andrea now lives permanently in Africa spearheading the conservation efforts of manta rays in Mozambique.

Andrea’s PhD research (conducted through the University of Queensland), on the population ecology of manta rays, was the first ever doctoral thesis to be completed on these enigmatic animals.
Her recent discovery of a new giant species of manta ray in 2008 was one of the largest new species to have been described by any scientist in the last 50 years.

She is known as the Queen of Mantas for her outstanding contribution towards a greater understanding of (and protection for) these gentle giants.

MANTA NEWS: In March 2013, at the CITES plenary session on listing sharks and mantas, oceanic white-tip sharks, 3 hammerhead species, porbeagle sharks, sawfish and MANTAS were all protected under CITES (the Convention on International Trade in Endangered Species of Wild Fauna and Flora, also known as the Washington Convention)! The Bahamas supported the listing, recognizing sharks are worth more alive than dead by citing over 80 million US dollars in tourism. Liberia supported the proposal and asked for CITES help in its waters, citing concerns over policing its 560km of coastal waters with only 1 coast guard! The Maldives delegate said; “in 2011 we banned shark and manta ray catches because they are worth more when conserved via alternative livelihoods like ecotourism”.

Regarding the CITES results, Dr Andrea Marshall said (via HER BLOG); “these iconic marine giants have made history again. This time not with the marvels of their biology, with their feats of endurance, or even with their unparalleled grace and beauty, this time they have made history as a trendsetter in a new age of ocean conservation.”

Did you know? “The different species of manta rays have very different distributions, however … the two Manta species are sympatric in a few locations around the globe including Mozambique, Hawaii, and Indonesia but at most of these locations, geographical separation, fine-scale habitat use, or seasonal movement patterns typically keep them from coming in contact with one another.”

Find out more about Dr Marshall, her work at the foundation and the megafauna she studies, at HTTP://MarineMegafauna.ORG Keep up to date with this specific trip at our FACEBOOK EVENT PAGE

Set sail from Bali – “island of the gods” – on a 9-day/8-night cruise, to explore all the famous dive sites of Komodo (ending at the port of Labuanbajo in west Flores). The Komodo National Park offers excellent muck diving, but also outstanding pelagic action. Whether its nudibranchs and rhinopias you’re after, or manta rays and schooling fish, this cruise really has it all.

This famous dive destination is located within the Coral Triangle, an area that boasts the world’s highest marine biodiversity. Situated 200 nautical miles east of Bali, in the Lesser Sunda Islands, the Komodo National Park has a total land area of 75,000 hectares and encompasses a number of islands, the largest of which is Komodo (34,000 hectares). A total of 112,500 hectares of the surrounding waters is also under the jurisdiction of the park rangers, allowing for the protection of over 1,000 species of fish and hundreds of different corals.

Komodo’s dive sites stretch from the warm waters of the Flores Sea in the north to the chillier waters down south in the Indian Ocean and vary from gentle coral slopes to heart-pounding adrenaline thrill rides. The underwater terrain presents many contrasts as well, with sheer cliff walls, pinnacles, sandy flat bottoms, underwater plateaus, slopes, caves, swim – throughs, channels, all with differing colours, sizes and types of both hard and soft corals.

Along the way, dive around Moyo island, Satonda and Bima. Relax as we cruise through the Komodo-Flores channel. Two popular sites at Gili Lawa Laut, called Crystal Rock and Castle Rock, will offer opportunities for critter spotting as well as big fish action. In fact, the dive site of Castle Rock is a nice opportunity to try out a ‘reef-hook’ dive as you secure yourself to the rock and float in the current, watching the schooling fish and predator/prey action! Next, dive around Rinca Island and head on land to meet the Komodo dragons.

Currents in this area can be quite strong and we have to dive according to the tides, but with so many great sites to choose from we can always adapt the schedule for the best diving. Try something unusual at Sangeang Island as we dive in the shadow of an active volcano… feeling the hot springs bubbling up under the sand.

In general the water temperature in the Komodo area is around 26-28+ (78-82F+) so usually a 3-5mm wetsuit is fine, but the southern dive sites in Komodo can drop down to 24-26C (75-78F) so some guests prefer a 5mm with hood. For repetitive diving days you may start to notice the cooler thermoclines more than usual, so prefer to wear a slightly thicker wetsuit and/or a hood, but usually 5mm is sufficient. We don’t recommend gloves as this can encourage divers to touch corals or delicate reef areas, but for night dives, where you could be more likely to bump into fire coral etc (or the 2 days of diving in south Komodo), many divers do prefer earning a full length suit and hood/gloves.